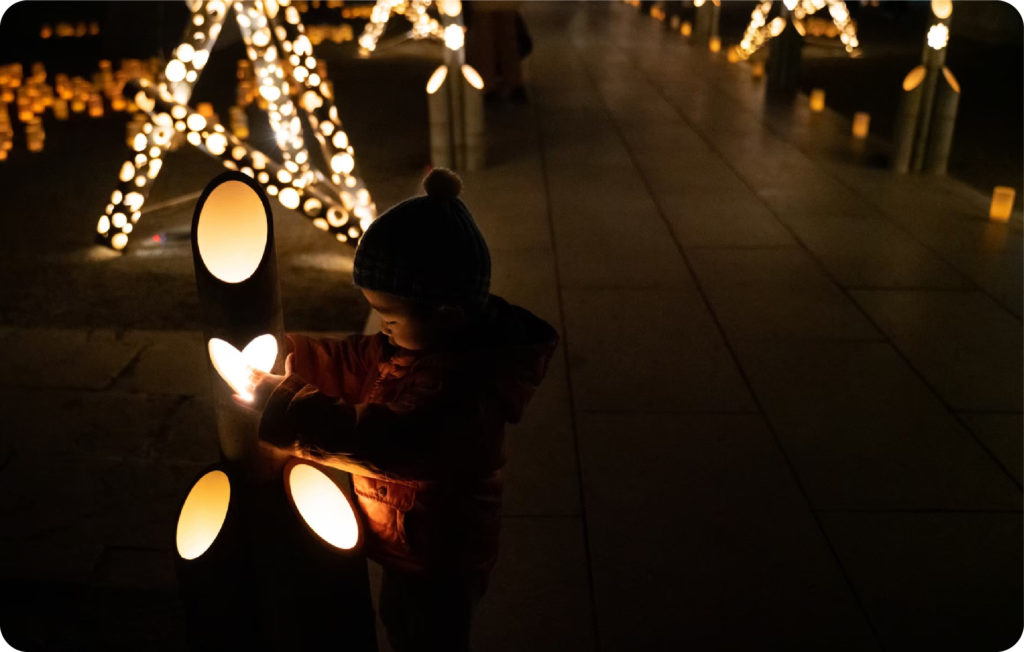 “Let’s Join Hands to Light up Our Community.”

Take-Akari is a bamboo lantern lit by a candle or LED. At CHIKAKEN, we have been creating and lighting Take-Akari across Japan for over 15 years.

There are many abandoned bamboo forests in Japan which have become a social problem. We cut out those abandoned bamboos, drill holes to decorate them and put light in them. Having worked in many communities, we have listened to various stories unique to the region.

More and more communities across Japan are now in a crisis, facing a decline in population and change in the social structure.

Take-Akari projects have created a network of people which continues to grow over Japan. Thanks to this network, we have been able to help those troubled communities and tackle various other social issues.

Our mission is to grow Take-Akari into a new Japanese cultural heritage which continues to light hope for the next 100 years. 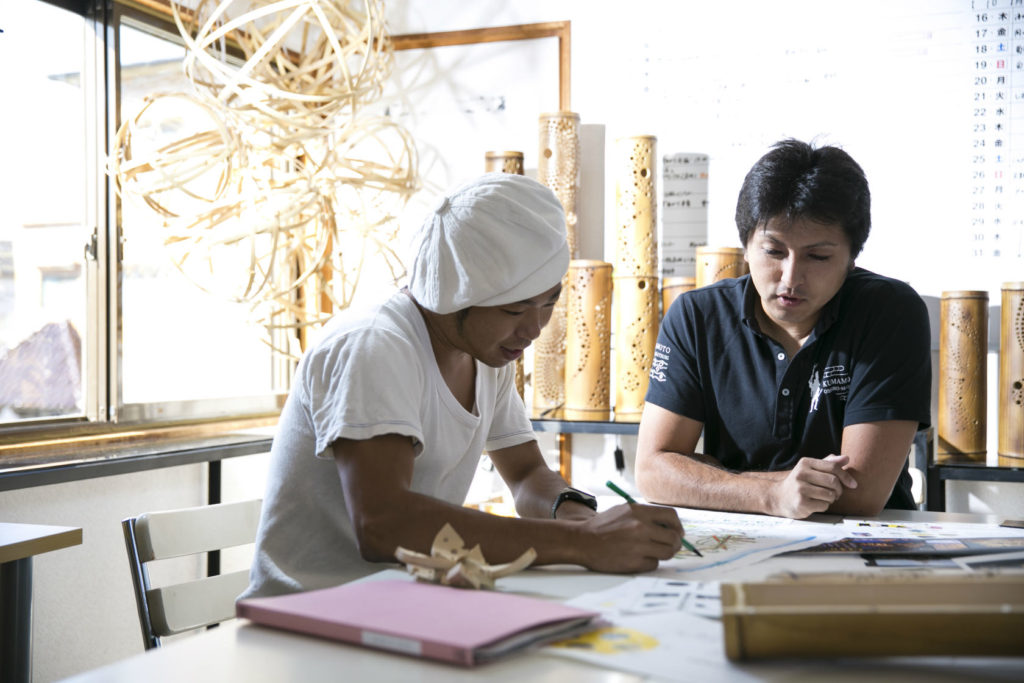 CHIKAKEN is a group of creators led by Chika and Ken who studied together at Sojo University. The group specializes in the design, production and installation of Take-Akari, bamboo lights. Their work is inspired by the idea of ‘community development through festival’ advocated by their university professor Keiichi Uchimaru. Founded in April 2007 in Kumamoto, Japan, CHIKAKEN currently has five members and produces Take-Akari in various communities across Japan, creating ‘lightscapes’ and ‘stories’ unique to the region.

Take-Akari is not just a beautiful illumination show whose magic lasts only until the end of the night. It has the power to bring people together, connect people to the community, and reunite people with nature. It is this power of Take-Akari that CHIKAKEN strives to promote as a new Japanese cultural heritage.

The key works of the group include The Centennial Anniversary of the Demise of Emperor Meiji (Meiji Shrine, Tokyo, 2012), G7 2016 Ise-Shima Summit Spouses’ Program (Mie, 2016), and Minna no Souka, a simultaneous light up event across Japan (2020). The group organizes various regional festivals in cooperation with the local communities. In 2004, they took part in the organization of the first Kumamoto Kurashibito Matsuri Mizuakari (Kumamoto), and has been directing its design and production since 2007. During 2016 Kumamoto Earthquakes and 2020 Kyushu Floods, they set up a disaster aid team and participated in the reconstruction activities with the victims of the disaster and supporters from other parts of Japan. The group organizes various local events, including Christmas Market Kumamoto which received around 200,000 weekly visitors in 2019.

We, Chikao Ikeda (CHIKA) and Kenshi Mishiro (KEN), started creating Take-Akari in Japan in 2004. At that time, we were students studying under Professor Keiichi Uchimaru at Sojo University. The idea of Take-Akari came when we participated in a bamboo lantern festival called Usuki Takeyoi (Usuki, Oita) . We saw firsthand how the community became energized as people worked together to light up their community and felt part of the community. This experience opened our eyes to the power and magic of the bamboo lights.

In the same year, we participated in the first Mizuakari Festival Kumamoto (‘Mizuakari’) held around the Kumamoto Castle. The experience of organizing a festival from the ground up inspired us to pursue Take-Akari as our life work and to start our studio. Mizuakari Festival enabled people to freely interact as community members without worrying about the social hierarchy. It was very exciting for us, who were students at that time, to be able to connect with people who held different positions in the society, such as company presidents. Today, Mizuakari has become a popular local festival which involves 6,000 volunteer organizers and receives 150,000 visitors.

In April 2007, three years after our first encounter with Take-Akari, we founded CHIKAKEN LLC. (converted to CHIKAKEN PRODUCTS Co.,Ltd. in 2012). The reason why we call bamboo lights Take-Akari is because we believe the name better represents the hope that it carries. Take-Akari is not just a kind of illumination. As we saw it happen repeatedly in various communities across Japan, it is the cornerstone of community development which brings people together and illuminates the beauty and potential of the community.

‘WA’, when spoken, means ‘circle’ in Japanese. Also, it is the pronunciation of three different Kanjis (Chinese characters) which represent three points that are important in our work. 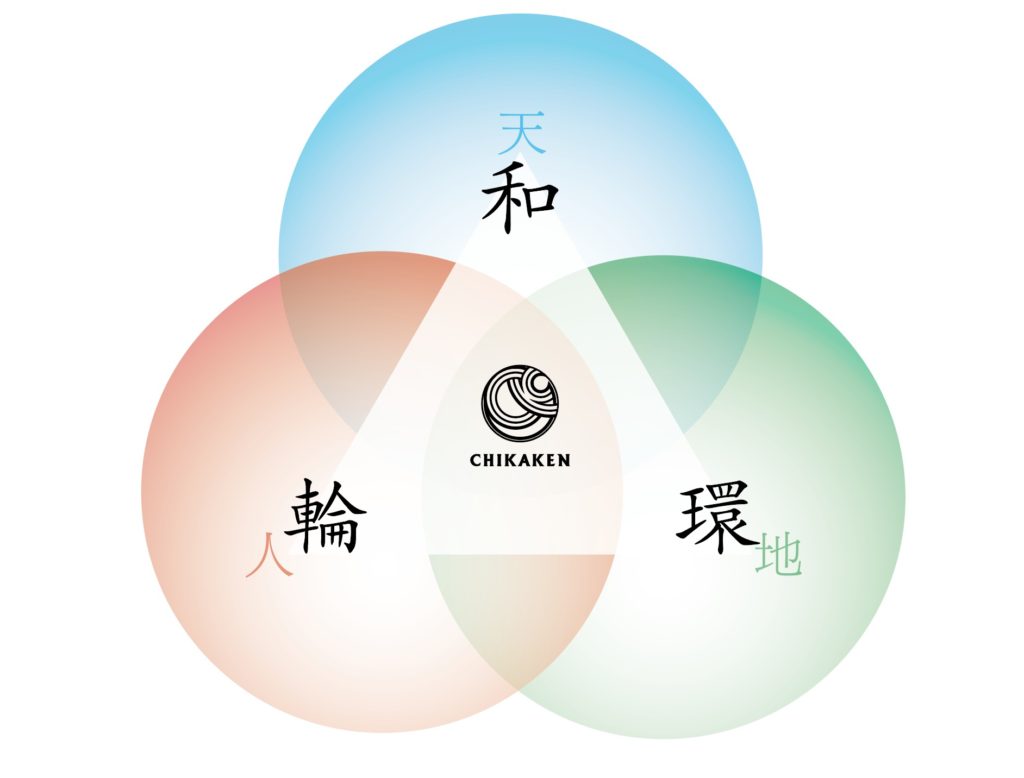 Joining hands is one of the outcomes which you can expect from Take-Akari. Although you can make Take-Akari by yourself, teamwork is essential when creating it for a festival. The process of making lights involves repetitive work: cutting bamboos to the same length, drilling holes, setting up on the exhibition site, placing candles, and lighting. Every step is important to illuminate the landscape and has to be done one by one. The final result is truly the fruit of people’s effort and teamwork. Sharing various moments through a festival helps people join hands just like how  stretch in all directions.

We hope Take-Akari encourages people to look at nature around them. Once you start noticing bamboo forests in your area, you will see that many of them are abandoned. These bamboos, which were once planted because they were essential in our daily life, are now considered a social problem. Take-Akari makes use of those abandoned bamboos, suggesting ways that they can be used as a resource. Cutting out bamboo and maintaining the forests in better shape will bring various benefits including increased harvest of bamboo shoots and use of forests as a tourist attraction. After serving its purpose, Take-Akari can be recycled into charcoal or fertilizer. Utilizing bamboo creates jobs and opportunities and promotes sustainable living and community development. It is the first step toward creating a sustainable society, ensuring better lives for future generations.

The Essence of Japanese Culture

We believe Take-Akari symbolizes the essence of Japanese culture which has been cultivated over hundreds of years. Japanese culture, in its essence, includes everyone, and sees beauty and importance in seeking a respectful, harmonious relationship with nature. Because bamboo has always been a motif and material that are central to Japanese culture, Take-Akari resonates with places of worship, such as Shinto shrines and Buddhist temples, and traditional arts and dance which showcase the best of each region.

There is a word we always recall. “A perfect gift.” This is the word of a Philippino lady who participated in our event which took place in the Philippines in 2014. We created Take-Akari as part of the memorial service held for the local community which was severely hit by a typhoon. The lady told us that she was touched by the fact we decided to support them by traveling to the Philippines and teaching them how to make Take-Akari instead of sending money or goods. In the following year, the people created bamboo lights without our help, and since then it has become an annual tradition of the community. In the photos they sent us, we found Take-Akari decorated with traditional Philippino design displayed next to the ones we made. It made us emotional because this was exactly what we had always envisioned Take-Akari to be.

We believe that a festival, in its original form, is something extraordinary that takes place in ordinary life and makes the ordinary better. We started making Take-Akari as a way of ‘developing community through festivals’, a method advocated by our professor Uchimaru. Despite that a festival lasts for only a couple of days at most, when it is held every year, the experience and excitement of organizing it transform the community into a better place. It is this that we believe we were able to achieve in the Philippines. It was the first moment that we saw the ‘WA’s happen overseas.

Bamboo is a type of material which can be found, cut, and crafted anywhere by anyone. In other words, what we do is so simple that anyone can do it. As a studio, we try to differentiate ourselves by doing it ‘more’ than anyone else can.

It has been 15 years since we started creating Take-Akari, always pushing our limits. Our work has connected people across Japan and the world. As a result, we have come to take part in a variety of projects, such as developing communities, starting up new projects, protecting the environment, getting involved in education. Looking back, we are happy to say that our work has greatly contributed to SDGs.

Since 2011 Great Tohoku Earthquake , disaster aid has become one of our main projects. In 2016, when our city was hit by Kumamoto Earthquakes , we received a lot of help and saw how the network of people grew. This experience helped us react quickly to the severe flooding in the   in July 2020. The network of people created through Take-Akari has not only inspired people but also led to various disaster aids.

We started our studio believing that Take-Akari is a way to develop communities. However, it is important to remember Take-Akari is only a tool. What matters is not that it is bamboo or the design or the method, but that each one of us takes action to create a community which we feel proud of and contributes to it as an empowered member.

This, we believe, is the message of Take-Akari. We strive to make Take-Akari a new Japanese cultural heritage which continues to develop in the next 100 years. Take-Akari creates peace in the world by inspiring people and helping communities around the globe prosper. 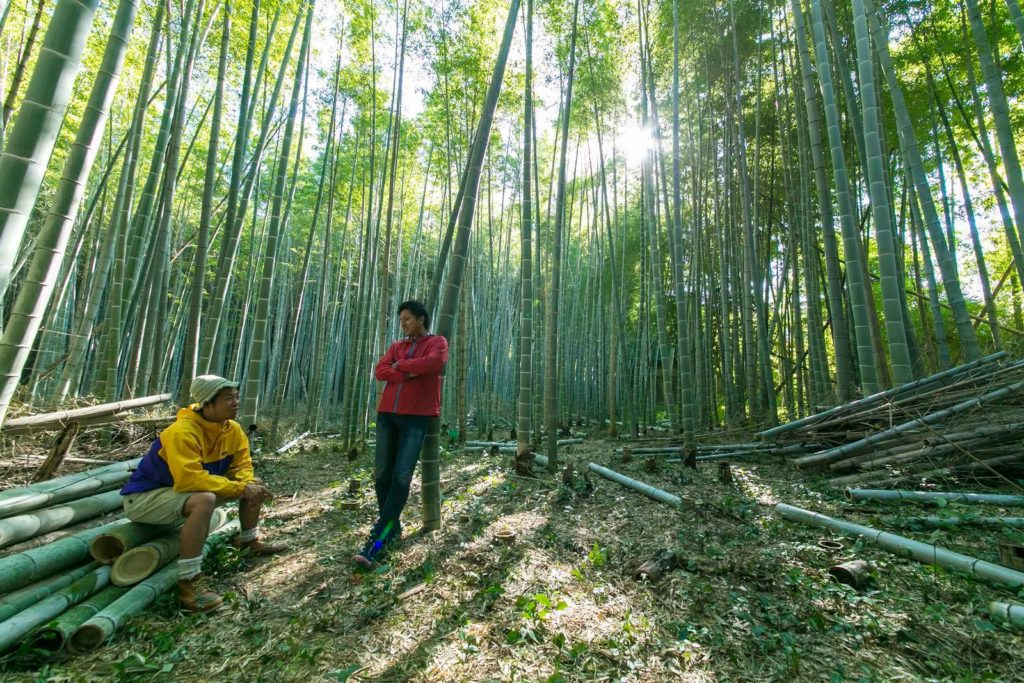 Chikaken’s products came into being as a means to spread the ideas and projects by CHIKAKEN. Commercializing the Take-Akari concept beyond its initial existence as an elusive work of art has allowed many more people to experience its beauty, lighting up as many hearts and spaces as possible.